At CARMAH we regularly interact with other researchers and museum professionals, as well as with the interested public, through talks, panels discussions and other formats of critical engagement. In this section you can read further information on upcoming as well as past events at CARMAH. 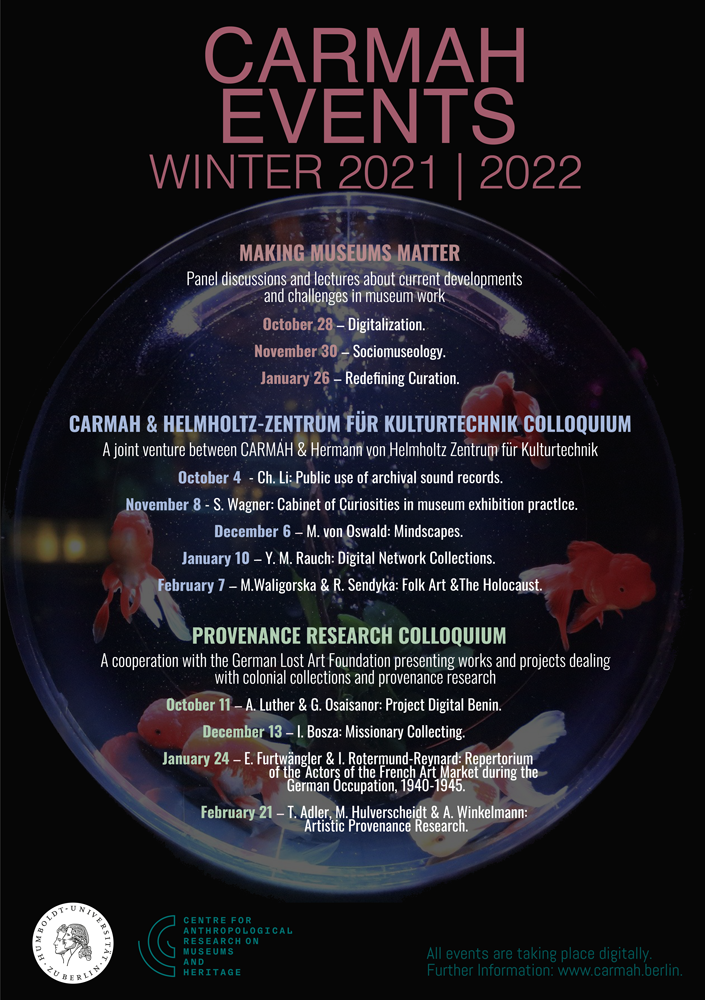 Magdalena Waligorska and Roma Sendyka will present and discuss their ongoing research on carvings and paintings of Holocaust scenes created in the postwar decades by Polish folk artists, offering new perspectives on postwar memory processes.

Presentation of the recently launched digital open-access portal "Repertorium of the Actors of the French Art Market during the German Occupation, 1940-1945".

Presentation of the project "Digital Network Collections", which deals with a conceptual planning of a digital network of Berlin's university collections, in order to create a common interdisciplinary basis that enables the research and digital evidence of objects. The lecture will be held in German.

Isabella Bozsa will give a lecture on "Missionary Collecting in Cameroon during the German Colonial Era: Acquisition Contexts, Missionary Propaganda, and Spaces of Action."

Mindscapes. Insights into a project between politics, research and cultural production.

Museums making social policy! A conversation between Prof. Dr. Mario Moutinho with Moana Souto and students of Würzburg, exploring how to engage in the development of public policies, activism, and protest in the field of museums.

Magda Buchczyk will present her research on the social and political transformations of Polish weaving in the context of Nazi-era curating, state socialist craft revival in Poland and current global, commercial afterlives of this art

Three days online conference, organized by the German Lost Art Foundation, in cooperation with the Stiftung Preußischer Kulturbesitz and the Research Center for Material Culture of the National Museum of World Cultures, the Netherlands.

Sarah Wagner will present her dissertation, recently submitted to the University of Erlangen-Nuremberg, in which she investigated the Kunst- und Wunderkammer in museum exhibition practice.

Online discussion on the topic of Museums & Digitalization, organized by the Ludwig-Uhland-Institut für Empirische Kulturwissenschaft Tübingen, in cooperation with CARMAH.

Book presentation of 'Across Anthropology. Troubling Colonial Legacies, Museums, and the Curatorial' by Jonas Tinius and Margareta von Oswald, in an online talk, together with Leontine Meijer-van Mensch (Director of the Ethnological Museums in Leipzig, Dresden, Herrnhut).

Presentation of the project 'Digital Benin' (https://digital-benin.org/) by Dr. Anne Luther and Osaisonor Godfrey Ekhator-Obogie. For registration, please send an email to veranstaltungen@kulturgutverluste.de

Join Sharon Macdonald (founder and director of CARMAH) and Maria Kobielska (Jagiellonian University in Krakow, Poland) on October 7, 2021, at 7 p.m., for a discussion of the memorylands we live in. The discussion will focus on Prof. Macdonald's acclaimed book 'Memorylands: Heritage and Identity in Europe Today' (2013), which has been translated into Polish by Robert Kusek and published the International Cultural Centre in Krakow.

Christopher Li (Lautarchiv, HU Berlin) will talk about legal and cultural-ethical aspects of the public use of records.

The workshop has the goal of presenting the first, preliminary results of the new cutting-edge research on lost shtetls after 1945, as well as addressing some overarching methodological questions about the challenges of investigating the Jewish absence (and presence) in the post-Holocaust and post-Soviet rural setting.

Focusing on contemporary cases of violent dispossession, appropriation and extraction as well as struggles for the commons, the workshop poses the question anew as to the relation between capital and sovereignty in the contemporary moment.

Over the last two decades, the ubiquity of digital infrastructures has brought about numerous drastic changes to a globalized world. One of the most pressing socio-political questions on a global scale is how digitization has changed the ways in which particular truths are enacted and established in everyday life. Following these and further examples, the 7th conference of the dgv-working group “Digitization in Everyday Life” at the Humboldt University of Berlin will examine concrete practices of digital truth-making.

The conference 'Now, to the Future. Transformations in Museums and Heritage in the 21st Century' is POSTPONED and will include inputs from James Clifford, Haidy Geismar, Barbara Kirshenblatt-Gimblett, Henrietta Lidchi, Wayne Modest, Irene Stengs and others TBC. The exact date is yet unknown and will be determined according to any risks posed by the COVID-19 crisis.

Open discussion on challenges and potentials of collaborative production in museum contexts.

On 21-22 September, Roger Sansi (Barcelona) and CARMAH research fellow Jonas Tinius organised the 2019 interim meeting of the Anthropology and the Arts (ANTART) Network, which they convened within the the European Association of Social Anthropologists (EASA). CARMAH was delighted to host the event, which was open to the public.

ODDKIN°labs are prototype workshops that explore the Museum für Naturkunde Berlin by questioning objects, spaces and narratives with a transdisciplinary approach.

In their collections and their buildings, museums often carry traces of religion, past and present, which they curate and narrate for diverse audiences. Increasingly, museums are called on to represent and acknowledge the politics embedded in these collections, whether by repatriating spiritually-charged objects acquired through colonial networks or by telling more complex stories of national histories of racism, antisemitism, and violence.

Convened by Katarzyna Puzon, the workshop brought together international scholars to discuss Islam and heritage in different parts of Europe and across various scales.

Screening of 'A început ploaia/It started raining: Fighting for the right to housing in Bucharest', the documentary directed by Dr Michele Lancione, Senior Research Fellow at the Urban Institute, University of Sheffield.

Organized by Christoph Bareither and Ingrid Tomkowiak, the 5th conference of the dgv working group „Kulturen populärer Unterhaltung und Vergnügung” (www.kpuv.de) in cooperation with the Centre for Anthropological Research on Museums and Heritage (CARMAH) raises critical questions at the intersection of popular culture and memory/heritage studies.

The workshop “On Common Grounds?” aims to bring together people from different parts of the world whose research critically reflects on the processes and impacts of various approaches towards museums and heritage sites.

Panel: ‘Time and Tradition: the temporalities in and of cultural production’ (convened with Prof Georgina Born), Association of Social Anthropologists of the UK and the Commonwealth (ASA), University of Oxford, UK. 18-21 September 2018.

Alterity describes the state of bring other or different. A concept entangling postcolonial critique with key debates around ontology, phenomenology, and anthropology. This symposium opens up discussions around alterity from the field between art and anthropology.

On 28 June, the “Dead Images” exhibition opens with a conversation, facilitated by Sam Alberti (National Museums Scotland), between Tal Adler (Humboldt University of Berlin) and Charlotte Roberts (University of Durham). This will be followed by a one-day international conference on 29 June that brings together individuals concerned with collections of human skulls, including artists, archaeologists, historians, and anthropologists.

Peter McIsaac gives a talk about musealization, the history of medical collections, gender, and popular anatomy exhibition in Germany.

For this encounter, Alya Sebti (director, ifa-Gallery Berlin) and Jonas Tinius speak about the institutionalisation and destabilisation of curatorial and anthropological practices.

This event uses the motto of the European Cultural Heritage Year 2018 – Sharing Heritage – to critically explore the role of “Islam” in discourses about Europe’s heritage. Discussions will involve the motivations and practices that shape and are shaped by these discourses.

This upcoming semester, CARMAH is hosting the department seminar series jointly with the Institute of European Ethnology. The series is organised by Jonas Tinius, Tahani Nadim, Sharon Macdonald and features a set of international speakers as well as roundtables, panels, masterclasses, and evening lectures on transformations of anthropology and anthropological transformations. Feel free to join on Tuesdays, 12:15 - 1:45 p.m.

The e-book on the conference of the same name, held on April 7th & 8th of 2017 will be presented and discussed with a panel of guests and Larissa Förster.

The workshop was a collaboration between CARMAH (Humboldt-Universität zu Berlin) and the Ludwig-Uhland-Institut für Empirische Kulturwissenschaft der Universität Tübingen.

Organised by Katarzyna Puzon and Christine Gerbich, the workshop brought together researchers and practitioners to discuss and reflect upon the ways in which Islam is represented in different museum contexts.

Organized by Duane Jethro (CARMAH) and Abdoulaye Sounaye (ZMO), the workshop brought into conversation scholars working in different disciplines and a number of projects engaged with questions of material culture, religion, heritage and difference.

The meeting brought together all eleven TRACES partners to think through the concepts of “Contentious Heritage” and “Reflexive Europeanisation” as well as discuss the progress of each Creative Co-production and work package.

Closed two-day symposium at CARMAH on how we can think and do museums and heritage differently with academic and museum experts from Berlin as well as abroad.

Public Lecture given by Haidy Geismar (University College London) on 26 July 2017 at the Tieranatomisches Theater.

One-day workshop at CARMAH, organised with the research team of the project "Museological Framings of Islam in Europe" (University of Gothenburg).

The Colloquium for the Summer Semester 2017 at the Department of European Ethnology is organised by Martina Klausner (IfEE) and Jonas Tinius (CARMAH).

For the World Café section of its 2017 Conference, CARMAH invites early-stage researchers to submit proposals by 15th February 2017.

Sharon Macdonald and Jennie Morgan from the University of York present at the IfEE Museumslabor at 6pm, IfEE, Room 107a.

A Talk by Arjun Appadurai, followed by a conversation with CARMAH Researcher Jonas Tinius and curator Bonaventure Soh Bejeng Ndikung.

A lecture by Prof. Laurajane Smith, followed by talks and a panel discussion with Berlin museum professionals.

Talk by Wayne Modest, Head of the Research Center for Material Culture in Leiden and former Head of the Curatorial Department at the Tropenmuseum, Amsterdam, followed by a panel discussion.

A presentation of the Labor Migration together with CARMAH researcher Jonas Tinius.

Two talks by CARMAH researchers Larissa Förster (together with Holger Stoecker), Tal Adler and Anna Szöke on the topics of provenance and contentious cultural heritage.

Barbara Kirshenblatt-Gimblett from POLIN shares her experiences in curating at the POLIN Museum of the History of Polish Jews in Warsaw.

Colloquium for the summer semester 2016 at IfEE organised by CARMAH members Sharon Macdonald and Rikke Gram, together with Regina Römhild and Leonore Scholze-Irrlitz.

A joint collaboration of CARMAH and the Woolf Institute, Cambridge, UK, exploring the topics of difference and diversities with international scholars.