—This is a slightly adapted version of the post which was first published in the Religion Matters blog, on 15 June 2020—

In a period where statues commemorating colonialism, slavery and racist exploitation are increasingly being taken down,the Prussian Cultural Heritage Foundation has pushed ahead with the hotly debated decision to build the Berliner Schloss, a reconstructed Prussian castle, in the centre of Berlin. It will house the Humboldt Forum which will display the ethnographic collections from Africa, Asia, the Americas, Oceania, as well as a Berlin exhibition, and function as a dynamic heritage institution, that includes research and conference facilities. Recently it announced that the building’s Christian decorations, including biblical inscriptions, a cupola and a golden cross above the building’s entrance, would be completed, triggering heated public debate. In this ethnographic vignette I want reflect on how the cross intersects Christianity, aesthetics and colonialism in ways that make for generative discussion about the relationship between religion and heritage in Berlin and beyond. 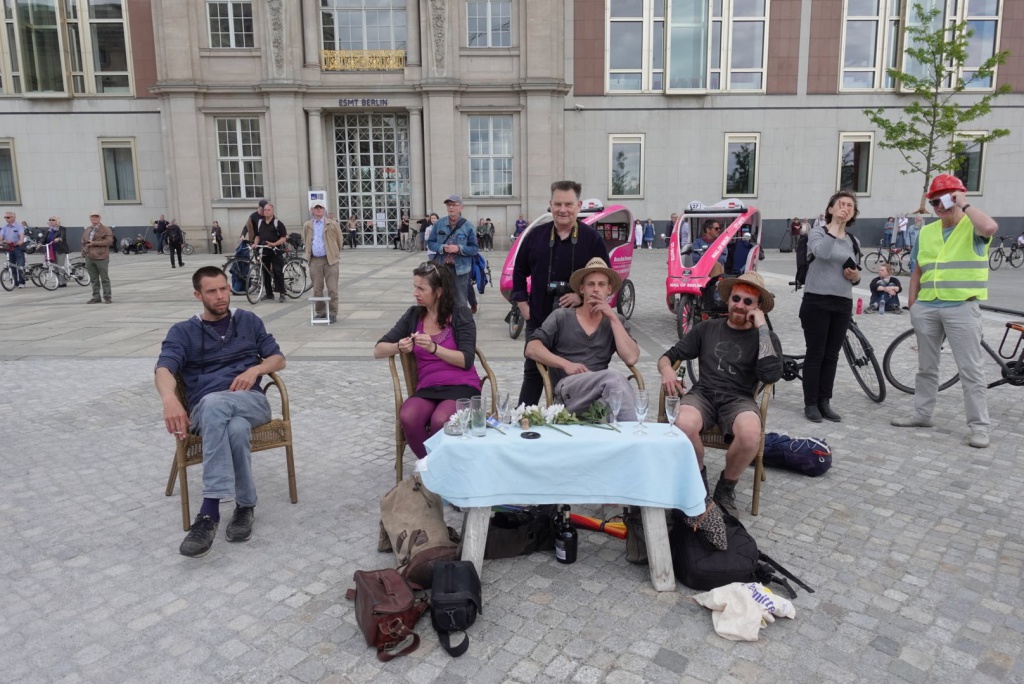 Having pitched at a prime spot, with a table filled with glass flutes, beer and prosecco, Andreas Hoferick and his team of sculptors were in a celebratory mood on the afternoon of the 29 May 2020. The day had arrived where the fruits of some of their prized work would be hoisted high above the city of Berlin, on top of the Berliner Schloss. With almost three decades in the trade as a stonemason and sculptor specialising in classical and neo-classical reconstruction, Andreas Hoferick, a Master Sculptor, and his team had worked on a number of decorative elements visible on the celebrated exterior. Indeed, he and his team took pride in their work, interpreting their craft as an inherited tradition that carried religious connotations of bringing cold stone, steel and bronze to life. As expressed on their website, “Tradition, for us means respecting the old masters. From ancient Greece and Rome to renaissance Florence, neo-classicist Prussia and baroque Saxony. We owe a debt to their skills and their heritage”. As the manifest will “to shape matter into three dimensions”, sculpture, Hoferick claimed, was about “breathing life into matter: stone, bronze, terracotta, stucco … any natural substance … that can be shaped by human hands”.

Their dedication and fidelity to “the beautiful, the good, the true” art of sculpture could be seen as invaluable for the Berliner Schloss project. Situated on the Museum Island in Mitte, the contemporary Stadtschloss is a reconstruction of a Prussian Castle that had been demolished in 1950 to make way for the Palace of the Republic. The Palace of the Republic had housed the parliament of the former German Democratic Republic and was demolished in 2006. The Berliner Schloss has risen up in its place. Claiming the site of a building that had been firmly anchored in East German popular memory, the Stadschloss project was initiated to, it was argued, restore the architectural integrity of the inner city by creating seamless, accurate historical symmetry with the surrounding church and museums on Museums Island. Overwriting East German history through the demolition of the Palace of the Republic and re-placing it with a Prussian Castle also meant that project initiators and the Berlin Senate had sought to reach back and recover what appeared to be an untroubled historical period in which to anchor post-Cold War German cultural memory.

Project organisers insisted on the authenticity of the new Berliner Schloss building as an exact replica of its historic predecessor. In their search for architectural purity, the project architects used photographs and old architectural plans for exacting guidance on important design features, especially those that would decorate the façade. Hoferick and other master artisans and sculptors would assist by breathing life into the contemporary building’s character, crafting some of the decorative elements that would animate the inalienable architectural authenticity of three sides of the building. Yet, despite the insistence on authenticity, a fourth façade would remain undecorated, with large modern windows and clean architectural lines that, in its gesture to the contemporary, also pulled the building into the present. 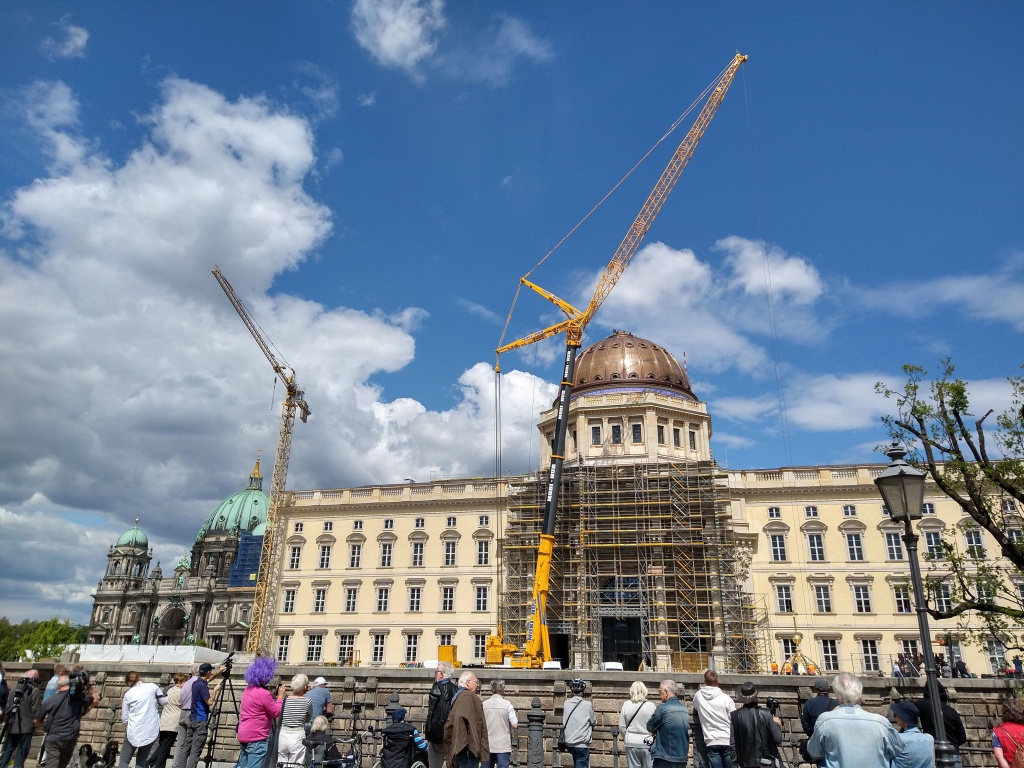 Sitting on the Schloss Platz, surrounded by hundreds of other visitors to the Stadt Schloss construction site on the afternoon of the 29th of May, Hoferick and his team settled in to celebrate the installation of the golden cross and cupola, a shining masterpiece of angels, gold and bronze. The team had contributed to the design of casts for that would be used by the forger to cast the cross and cupola. As a raw structure peaking over a fence surrounding the construction site, the cross and lantern were oversized, otherworldly and out of place. Its size as a material Christian symbol, ironically paralleled the heated, public controversy it triggered when the date of its installation was announced. While the Stadtschloss architect Franco Stella had included a cupola in his drawings, the cross was markedly absent, or at least not made clear after the project was approved. In the weeks leading up to its final installation it re-ignited public debate about the cross that had been triggered in 2017 already when the funds for the cross were secured through a generous donation. 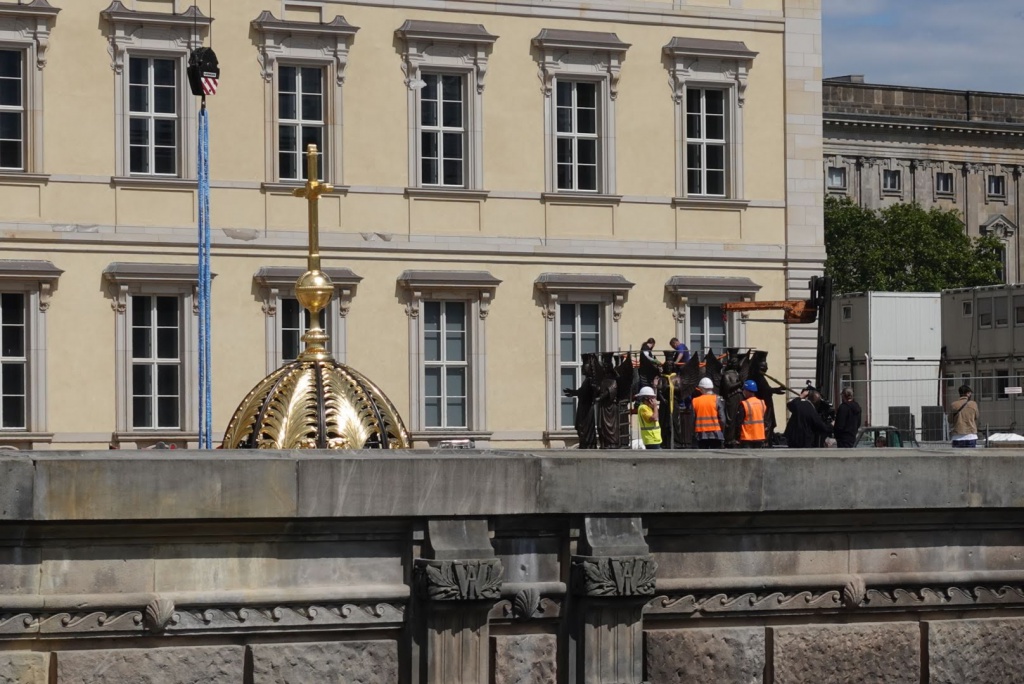 View from across the moat and construction barriers

The Humboldt Forum was itself controversial. For critics, the problem was not just the tastefulness or appropriateness of building a reconstructed Prussian Castle, or its 600 million euros price tag, or that it stood on the site of the Palace de Republic, an iconic building that served as an important site of memory for East Germans. Rather, for many, it was about the fact that it would house a new heritage institution, the Humboldt Forum, which curated and displayed non-European ethnographic collections. News of the imminent installation of the cross therefore revived a religious trajectory of debate that cut across an already charged conversation about the German colonial past and the history of ethnographic collecting and display.

Like the crosshairs of a riflescope, the cross seemed to bring renewed focus to the tension between the building’s interior and exterior, that, for its originators and proponents, was a crucial architectural and conceptual organising principle. As the finished cross was brought to site for installation, critics writing in various German newspapers wondered again; how could ethnographic collections from non-European Others, material sometimes collected under dubious circumstances during periods of colonial expansion, or deployed for problematic scientific research, be relocated to a Prussian Castle, a striking symbol of the German colonial enterprise? And how could these collections be redeemed for dialogue, exchange and the celebration of diversity as the Humboldt Forum espoused when they were displayed under the sign of the Christian cross, above a gilded Christian inscription commanding visitors, members of source communities and employees to “fall on their knees and bow to Jesus”. Under the lens of careful, sustained public scrutiny, the artificial division between the Berliner Schloss building outside and the Humboldt Forum inside, between the castle and its contents, seemed to collapse into a monumental conceptual problem criss-crossed with self-evident, sometimes deeply hurtful contradictions.

This is especially significant with the rise of the Black Lives Matter movement following the murder of George Floyd in the US: protestors have implicated material cultural forms in the validation of problematic, exploitative and racially offensive histories, and ethnographic collections’ ties to colonial projects. The direct action that we have seen in recent weeks, marked by the toppling of the Edward Colston Statue and the attempted seizure of African artefacts from the Quai Branly museum in Paris, shows the strong affective registers of historically inscribed and racialised pain material cultural forms resonate with today.

There was, however, little to no vocal opposition to the raising of the cross on that gloomy afternoon of 29 May 2020. That is despite activist groups, such as Berlin Postkolonial and the Initiative of Black People in Germany, representing Afro-Germans and the African diaspora campaigning for years against the Humboldt Forum project. There was a sense that for the hundreds gathered outside the building the criticisms did not matter that much. Craning their necks to see the cross or take pictures, onlookers appeared to be more invested in being present at a spectacle of a major architectural event. For a member of Hoferick’s team, I gathered from a brief conversation, the criticism also seemed unimportant. Politics and religion, he seemed to suggest, were a distraction from the inherent beauty of architecture and sculpture, which should be appreciated on its own terms. 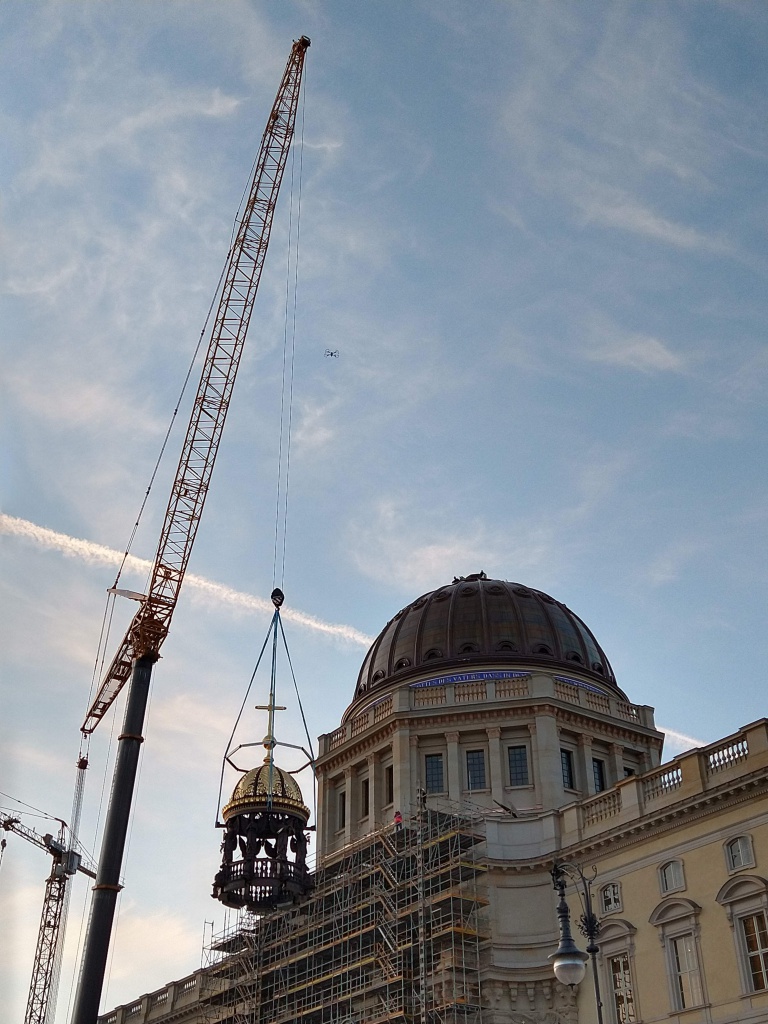 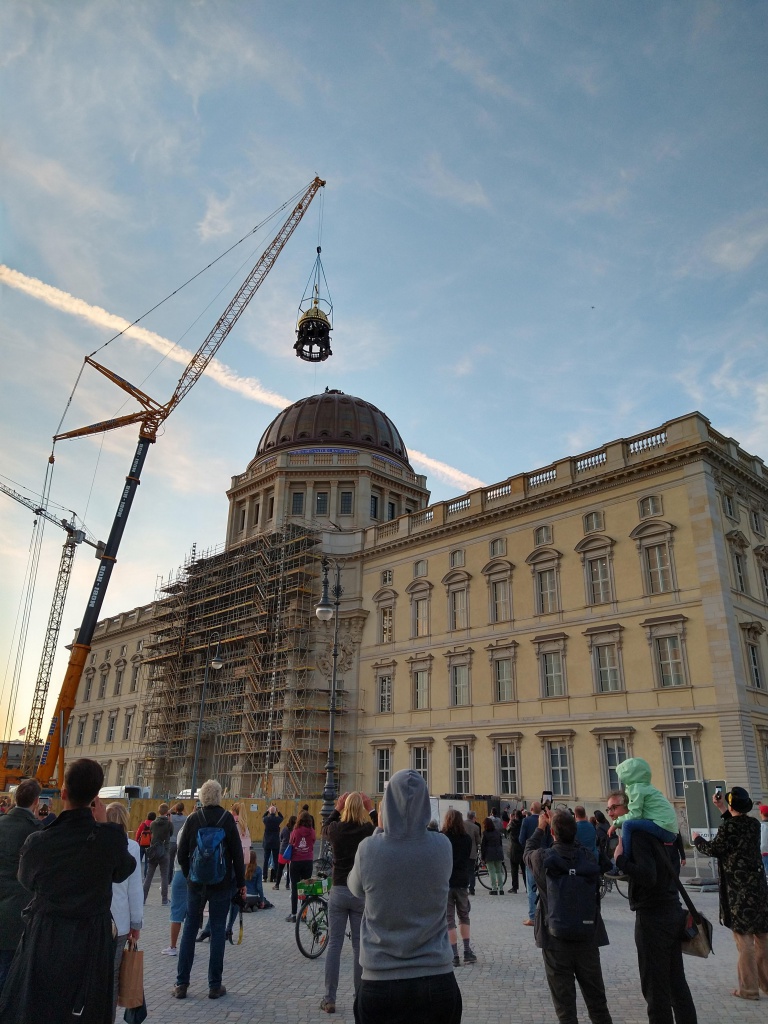 Just before 9pm, as the last daylight dissolved in streaks of purples and oranges of evening, workmen finished checking the cross and cupola structure, then stood back, still elevated on a cherry picker, to take a few last photos. The crowd cheered. The workmen were then lowered out of sight and the Schloss Platz fell silent. The droning, soft whine of the crane leaning overhead then kicked in, carefully raising the structure up, up, up into the evening sky. The cross gleamed as it twisted in its restraining chains. The crowd stood motionless, almost awestruck, pointing cameras and mobile phones in a kind of mock veneration of the shining, golden construction hovering between heaven and earth. In what seemed only a few moments, the structure was moved above the roof of the building and gently sank into place. This was eerie architectural poetry. 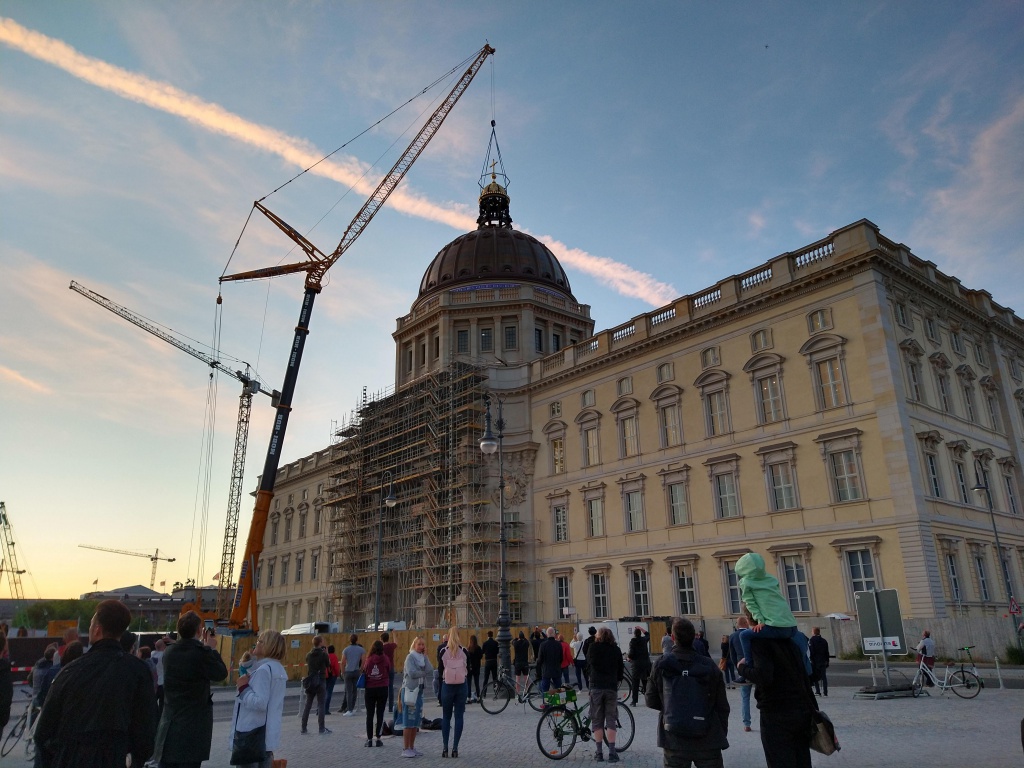 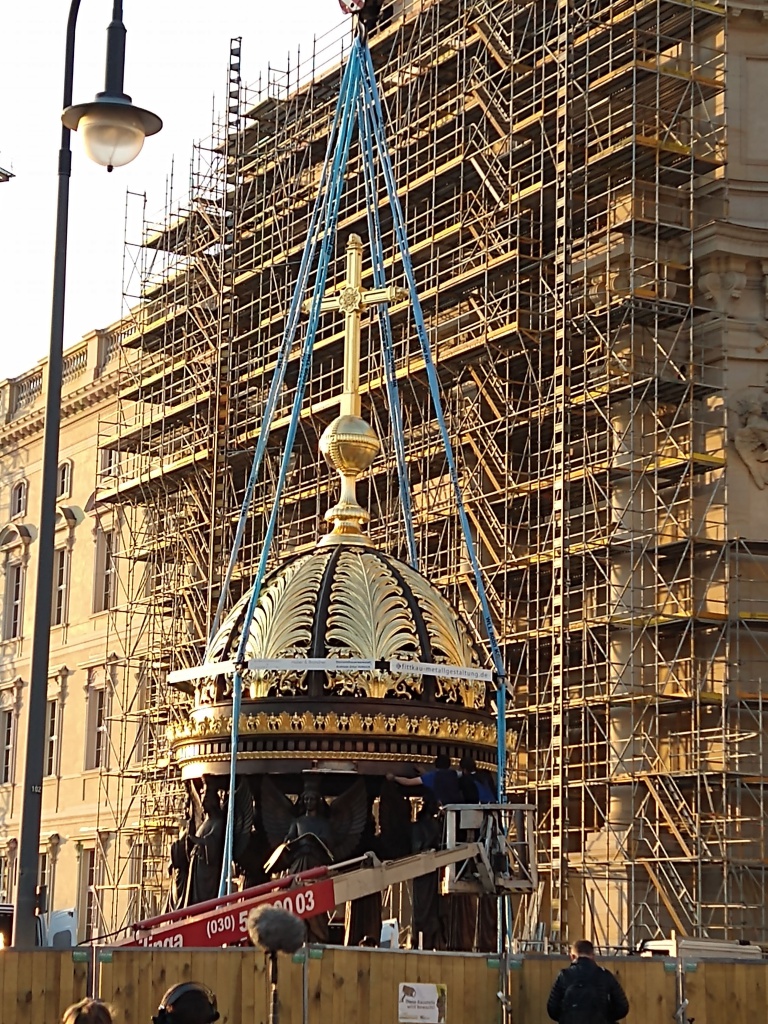 Cross shinning in the daylight

Fixed above the castle, the crosses’ installation in one sense closed the debate about Christianity, ethnographic collections and the German colonial enterprise that had enveloped the Humboldt Forum, since it seemed nothing more could be done. Yet this closure, instantiated by a grand and striking symbol, was, I wondered, suggestive of the place of religion in contestations around heritage institutions. How do we keep apart the designation practises, marked by the valorisation, preservation and housing of material culture, heritage implies, and the labour of sacralising, caring and management of religious objects? And how do we tease apart colonial history, Christian missionary work, ethnographic collecting and the social role of ethnographic museums today? The cross, therefore seemed to proclaim, not so much the reality of Germany’s problematic colonial past, but also that religion was strangely at the very top, at the very centre of heritage matters today.

Yet, as I have tried to suggest, as a gargantuan, golden object, the cross is also more than a conceptual flag for taking religion seriously. It also draws attention to the real material dimensions of heritage and public life. Clearly, heritage matters are about more than discussion in curated forums. It is a matter of concrete action that requires the radical, real revision of material relations with the past. Indeed it is a material and epistemic revolution that is more urgent and necessary than ever.

Duane Jethro is a post-doctoral researcher on the Making Differences Project at the Centre for Anthropological Research on Museums and Heritage (CARMAH). He is funded by the Alexander von Humboldt Foundation as part of the research award for Sharon Macdonald’s Alexander von Humboldt Professorship. His book, Heritage Formation and the Senses in Post-Apartheid South Africa: Aesthetics of Power, was published in 2020 by Bloomsbury Academic.