The failure of heritage to adequately account for ‘the ghostly’ emerges in various critiques of the field. Responding to the installation art of Michael Goldberg, for example, David McNeill suggests that ‘history as a séance, a conjuration, is as accurate a metaphor for the activities of National Heritage organisations as we are likely to find’ (2001: 55). This is because heritage for McNeill depends on a process whereby ‘selected “friendly” ghosts are trapped and condemned to a perpetual purgatory inside upholstered chaise lounges, bell jars, commodes, dados and stucco frames’ while others are ‘sent packing’ (ibid). Here then heritage is seen as a form of exorcism, with historic houses in particular orchestrating the ‘effacement’ of that which they claim to capture (ibid: 54). Working against this bowdlerisation of the past, Goldberg’s installations ‘invite back the ghosts that sanitised history has banished’ (ibid). A similar line of thinking can be found in Tim Edensor’s explorations of the post-industrial ruin, with the ‘interpretative encoding’ typical of heritage practice felt to ‘partially exorcise’ the ghosts that may ‘contact us’ at such sites (2005: 18).

Leaving aside the over-simplification of heritage contained in such critiques, we can begin to see that a desire to work with the spectral often goes hand-in-hand with a commitment to the affective sensualities and untold stories of place (the two share a common thread that would be worth investigating in more detail). As David Bell recognised, the language of ghosts gives us a way to talk about the ‘felt presence’ of certain sites, ‘an anima, geist, or genius […] that possesses and gives a sense of social aliveness to a place’ (1997: 815). Apprehending the tremulous qualities of the past in the present as manifest in the figure of the ghost is thus vital to understanding why heritage matters, but there must also be an acknowledgment that the very practice of heritage is as likely to smooth away such figures as reveal their full potency.

To think through this tension in any meaningful way we need to develop both a critical language to describe the ‘affective, historical, and mnemonic structures’ of such hauntings (Gordon 2008: 18), and a new means of producing knowledge that responds to the absent presences manifest in the ghostly. While such lines of enquiry seem central to the work of heritage, there has been no substantial investigation of the spectral from within the field. This is despite a wide-ranging prioritisation of the ghost over the past two decades in various connected domains, including literature studies, film, music, art criticism, sociology, anthropology, and architecture (see Blanco and Peeren 2013 for an overview of this ‘spectral turn’ in the humanities and social sciences). The exact contours of the ghostly will of course fluctuate across these different disciplines, but a broad commitment to politicising and animating the spectre as an affective force in the world permeates much thinking in this area.

This work responds to and builds upon Derrida’s 1993 book Spectres of Marx, often cited as a foundational text of what remains an intrinsically loosely defined research arena. More specifically, Derrida’s concept of ‘hauntology’ has come to underpin many of the advances made in this field (if we can give it such a label), offering a critical touchstone for thinking with the ghost as part of a broader emancipatory project of political and social change.

For Derrida, the neologism hauntology is necessary because ‘it introduces haunting into the very construction of a concept’ (1993: 202). Being – ontology – is therefore displaced by the shadow of the spectre of being – hauntology. A level of uncertainty and intangibility displaces the apparent solidity of the ontological. As Colin Davis writes, ‘hauntology supplants its near-homonym ontology, replacing the priority of being and presence with the figure of the ghost as that which is neither present nor absent, neither dead nor alive’ (2005: 373). The ghost emerges here then as a recognition of the presence of something that is no longer, but that still remains as ‘ineffective, virtual, insubstantial’ (Derrida 1993: 10). This does not involve a belief in ghosts as such, or even a conviction that the past is alive – ‘all it says […] is that the living present is scarcely as self-sufficient as it claims to be; that we would do well not to count on its density and solidity, which might under exceptional circumstances betray us’ (Jameson in Davis 2005: 373).

The insubstantiality of the here-and-now is thus tied to an acknowledgement of the ghost as a ‘seething presence acting on and often meddling with taken-for granted realities’ (Gordon 2008: 8, my emphasis). While this clearly draws together the past and present in an affective embrace, hauntology also has an eye to the future, or rather to the failure of certain futures to come to fruition. The first and most lasting of these is the spectre of communism itself – highlighted by Marx and Engels in the opening lines of their manifesto as ‘a virtuality whose threatened coming was already playing a part in undermining the present state of things’ (Fisher 2014: 19). The promise of communism thus haunts ‘the capitalist realist world’ (ibid: 27), a world that has trained us to forget that any alternatives to capitalism are possible. Spectrality in this sense refers to ‘a trace that marks the present with its absence in advance’ (Derrida 2013: 39). Such traces can only be discerned tangentially; they resist direct apprehension, operating in the faultlines of received knowledge and authorised histories. Both the no longer and the not yet are to be understood in this way, as spectres that haunt the present in their very non-being.

It is important to note I think that the evasiveness of the ghost as a figure in the world does not prohibit its politicisation. Indeed, for Avery Gordon this is the unique power of the spectre, which alters the experience of being in time, and the way we separate past, present and future (2008: xvi). In their haunting such ghosts ‘demand our attention,’ giving rise to an ‘animated state’ in which a repressed or unresolved social violence makes itself known (ibid). The urgency of this point is underscored by T. J. Demos in his analysis of recent artistic practices dealing with the legacies of colonialism in Africa: ‘The problem is not one of dealing with spirits from another world,’ Demos argues, ‘rather, it’s a matter of being sensitive to modernity’s phantoms – that is, the disturbances and lingering presences, or presences of absence in the orders of visual appearance, through which current social formations manifest the symptomatic traces and uncanny signs of modernity’s history of violence and exclusions’ (2013: 13). Here then hauntology seems to suggest a parallel path to that taken by other recent philosophical and academic trends – movements that share a concern for the ultimate unknowability and strange vibrations of the world, but perhaps lack the political edge that Derrida and others insist remain front and centre in hauntology. Notions of affect, speculative realism, object oriented ontology, and new materialism all move us away from the reality-denying concerns of social constructivism, but they are open to criticism for lacking a political-ethical stance on social issues. The key point here is that hauntology offers a means for ‘capturing enchantment in a disenchanted world’ (Gordon 2008: 8) while also acknowledging injustices and seeking more ethical futures. For Demos, this is partly to be achieved through ‘a different set of documentary possibilities that bring affect, imagination and truth into new experimental configurations’ (Demos 2013: 9). How might heritage take up this call to animate the spectres it is otherwise prone to exorcise?

Ghosts are an unavoidable component of modern social life (Gordon 2008: 7). They interrupt the present and indicate that, ‘beneath the surface of received history, there lurks another narrative, an untold story that calls into question the veracity of the authorised version of events’ (Weinstock 2013: 63). Hauntology recognises that in these ghosts lies the possibility of a renewed politics, a politics of ‘memory, of inheritance, and of generations’ (Derrida in Demos 2013: 43). Heritage is thus bound to the work of hauntology not just because the ghosts of place shape so many of our engagements with the past in the present, but because the constant urge to return and repeat that permeates the field leaves open the possibility of learning to live with ghosts, ‘justly’ (ibid). As Davis suggests, for Derrida, ‘the ghost’s secret is not a puzzle to be solved; it is the structural openness or address directed towards the living by the voices of the past or the not yet formulated possibilities of the future’ (2005: 379).

A question nevertheless remains around how best to animate these spectral potentialities. The concept of hauntology is only useful if it helps us to do more than simply name a situation: it must direct us towards alternative modes of production, and help us to find a route out of our current social predicament. Against the postmodern ‘extirpation of the uncanny’ (Fisher 2014: 134), hauntology allows us to work with what Timothy Morton calls ‘the weirdness of things’ (2013: 159). The task for heritage then must be to invent wholly new strategies and forms of practice to enact rather than exorcise the spectres that haunt our present moment. Bringing affect and imagination to bear on traces of the past represents an important mode of apprehension here, but this must not be at the expense of a politicised commitment to radical social change.

Derrida, J. 1993. Spectres of Marx: The State of the Debt, the Work of Mourning and the New International. Translated by P. Kamuf. (London: Routledge)

McNeill, D. 2001. Heritage and Hauntology: The Installation Art of Michael Goldberg. In: A. Geczy & B. Genocchio (eds.) What is Installation?: An Anthology of Writings on Australian Installation Art. (Sydney: Power Publications)

Morton, T., 2013. Hyperobjects: Philosophy and Ecology after the End of the World. (Minneapolis & London: University of Minnesota Press)

All images by Colin Sterling.

Colin Sterling is a heritage researcher and former curator at the Royal Institute of British Architects. He is currently writing a monograph entitled Heritage Reframed: Photography, Memory and the Affective Past. Later this year he will begin postdoctoral research at UCL investigating heritage and posthumanism. 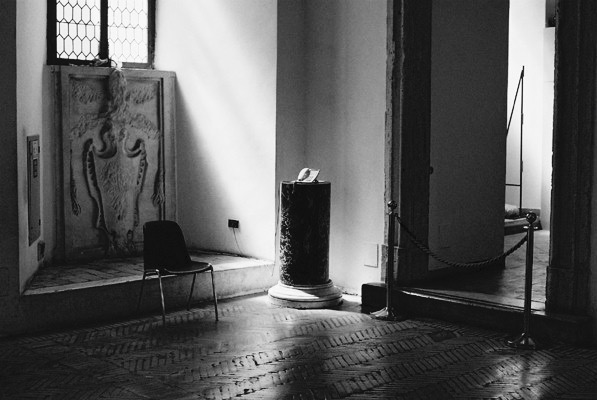 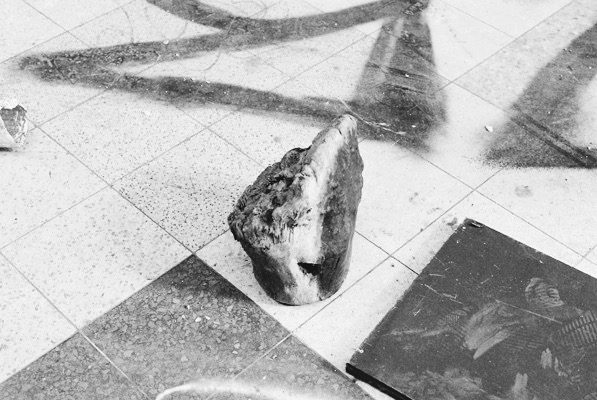 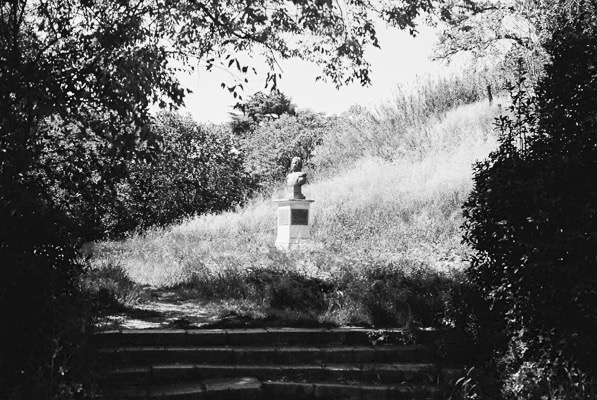 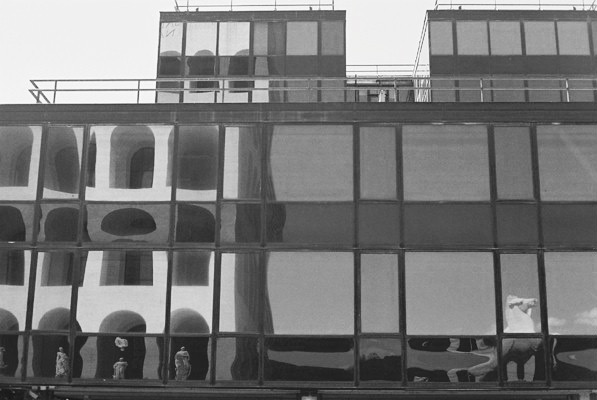