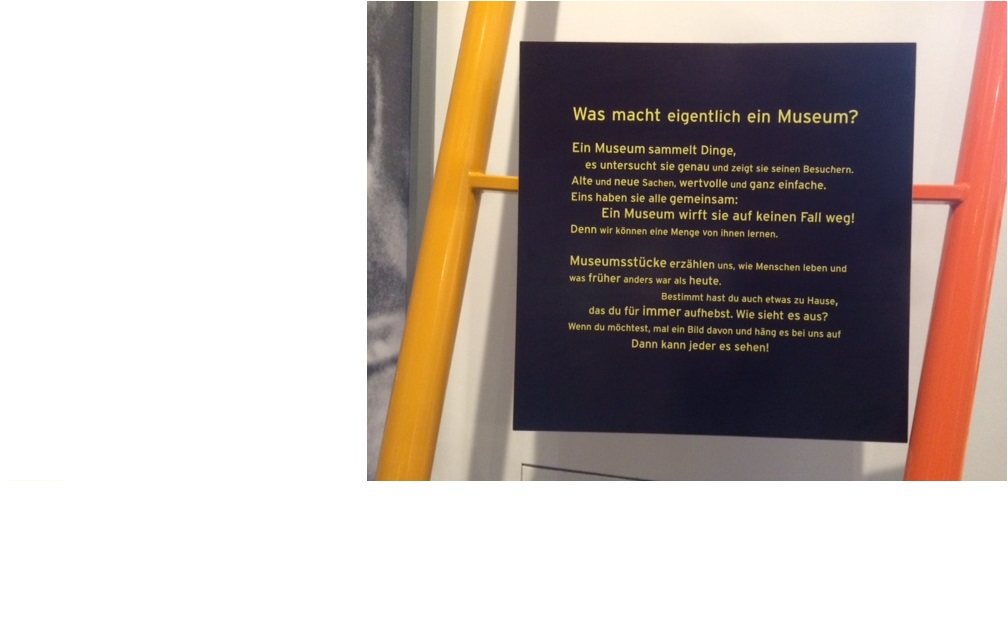 “Was macht eigentlich ein Museum?” The headline on a label at the children’s corner of the Jüdisches Museum in Berlin caught my eye the other day. One thinks one knows the answer, but in fact, presenting an unambiguous response to this seemingly easy question to a child would pose a problem. “Now let’s see how they manage to get that across”, I thought almost gloatingly. Only recently I was fascinated by how the DHM managed to break down complex historical facts on German colonialism on specific labels in so-called ‘accessible language’. Curious to find out what museums do, I read on: a museum collects a great variety of things, the label told me, it examines and displays them. It obtains valuable but also very ordinary objects. There is one thing, however, these different objects have in common: under no circumstances will the museum throw them away! (“Ein Museum wirft sie auf keinen Fall weg!”).

Rather than the statement as such, it was more the affirmative nature of the exclamation mark that gave me some thought. It added an indignant and defensive layer to the label, anticipating the possibility that someone might think that throwing away things is what museums might do; unacceptably so.

The polite word to use for such a process in a museological context is ‘de-accessioning’, but even under this label the phenomenon as such has not been widely discussed in museum studies and related fields. Why this is so, and why museums are (apparently) bound to keep objects forever has been subject to a book I recently co-edited on museum storage areas, spaces where thousands of objects continue to exist without ever being shown (ed. with Kavita Singh, Museum Storage and Meaning: Tales from the Crypt, forthcoming with Routledge). What are these objects, and why do museums feel an obligation to keep them? During my two-month fellowship at CARMAH these questions became pertinent in the conversations I had with various team members in the context of a variety of seemingly different projects, which pose very similar questions: what do we keep, and why? How do we know whether what we keep might be of interest for future generations? What do we get rid of, and how can we guarantee that we will not regret such decisions? Whose interests do we need to recognize when we keep objects for the future? These questions also came to the fore on a more political level at a roundtable I was involved in about ‘Heritage and the Politics of Recognition’, following an inspiring lecture by Laurajane Smith at CARMAH in December 2016. But most people would agree that they also play a role in our daily life. “Surely, you too own something which you will keep forever”, the museum label in the Jüdisches Museum concluded. Indeed, everyone who has undertaken some serious spring-cleaning has been confronted with this question. In these odd moments we envision our personal belongings as a potential archive for a future we cannot predict and for an audience we do not know; a moment, which can trigger thoughts much deeper and more existential than the original meaning the objects in questions ever had for us.

Halfway through my fellowship, I was confronted with these questions when I had to help clear the room of a great-aunt of mine who had died in an almshouse. She left no immediate descendants. The awkwardness naturally attached to such an occasion was enforced when my grandmother asked me to pick an object or two of my choice. Her sister (my great-aunt) loved playing the recorder, crocheting, and teaching budgies how to speak. Her tiny room was full of objects, which represented these peculiar passions, but I feel no particular affinity to any of these things. What to take? Something which was meaningful to her? Or meaningful to me? Unable to take a decision I observed how the dynamics unfolded: the family split into people who have “a thing with things” (and love owning many), blithely piling all sorts of strange knickknacks in bags and boxes, and those who don’t, like my ‘purist’ aunt who impatiently waited forever at the doorway, constantly asking whether we were finally done. For some reason I still need to figure out why no male family members had turned up in the room. I later found my uncle, enjoying cake in the kitchen.

In retrospect, the experience felt like a microcosm of many of the questions we had discussed at CARMAH about the material culture of the future: do we keep things for us, for those who originally owned them, or for our descendants? A workshop I carried out at CARMAH in January 2017, ‘Beyond the insular view: Berlin’s Museumsinsel in the light of current museological transformations’, took these questions further by looking at current debates about preservation both in Berlin and in the Middle East. Preservation, we discussed, is more related to disposal and even destruction than we often tend to think. Objects not being ‘selected’ for preservation are likely to be quickly disposed. It is often the case that the removal of former buildings, i.e. destruction, is a condition for the preservation of another. Palmyra’s construction as an empty tourist site in the early 20th century by the French Mandate, for which a lively village inside the ruins had to be destroyed, is a case in point. Up to then temples had been used as mosques, churches and even as a space to give birth. In Berlin, the ‘resurrection’ of a Prussian castle at the expense of the removal of the DDR’s Palast der Republic is one example of a collective decision in which one historical past was prioritized over another. Deciding which objects and buildings should and should not be preserved in the historically charged architectural and geopolitical infrastructure around Berlin’s museum island adds an additional layer to a debate, which is already highly controversial. Going far beyond Berlin’s large construction site on the Schlossplatz, the hardly noticeable and seemingly innocent clearance and removal of material culture in the city – former DDR flag poles and border posts – might today be labelled a necessary ‘disposal’ in a place with countless building projects. But, in the future, these small acts of removal might also be considered by some an act of violent destruction of historical traces.

The museological reflex to keep as many things as possible ‘just in case’ may counteract such potential conflicts, but even here, canons, taste and preferences change. Storage space is limited. Be it in a museum, during house-clearance, or in urban structures; the preservation of material objects is in fact a complex and multi-layered process in which several groups of interest are likely to remain ‘unrecognized’ (to speak with Laurajane Smith). Given the variety of possibilities and the complexities it is all the more noteworthy that preservation tends to not only be presented as a moral duty, but that is also subject to specific normative regulations adopted by institutions throughout the Western world; institutions which extend their values to remote territories and material culture, for instance, in the Middle East. In other words, current debates rarely consider that preservation and destruction are not necessarily opponents, but potential accomplices in many ways. It is perhaps one of the greatest ironies that these values and their seeming imperturbability are part of the reason for widespread destruction in some parts of the world: Objects seen of value by some but as “idolatrous” to others were sometimes destroyed precisely because they were considered valuable and worthy of preservation by opposing parties. In short, attacks on so-called ‘shared’ heritage in the Middle East may be targeted subversions of the preservation paradigm. But this – to use a German metaphor – is yet another construction site. 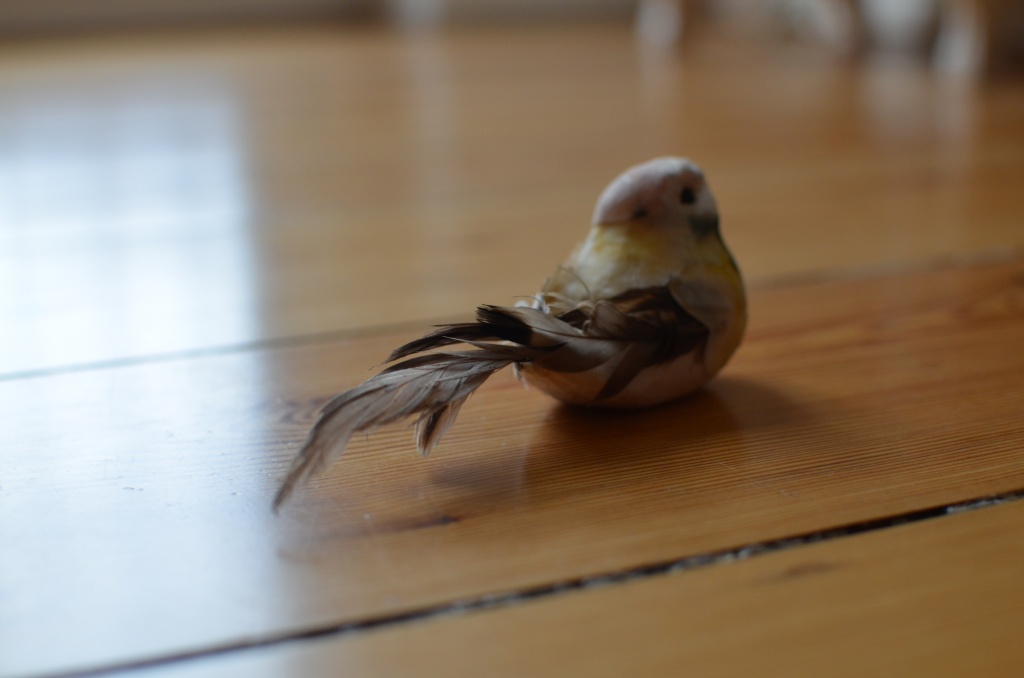 I managed to avert an ill-fitted winter coat and several hair clips after it was suggested that those were the things I should take. The problem was that there were things I actually did want to take, such as a tiny photograph of my great-grandmother in a silver amulet. But alongside other photographs this precious thing instinctively made its way to a red paper box, which everyone agreed my grandmother should inherit (who was in fact too busy with finding future homes for all those worn out coats in the wardrobe to even notice the amulet). Going through the piles of papers I found an envelope stamped in Cambridge, Mass, which contained a pile of photographs I had taken myself and sent to my great-aunt in 2013. I let it slip into my bag. Odd as it may seem, I liked the idea that my photographs went in circles and decided to archive the envelope and its content as a record of my cordial relationship with my relative. After much pondering I also took two further things, which I felt represented not only my great-aunt more specifically, but also the charged situation we were in on that day: a crocheted ladybird made out of wool and a nutshell, and a peculiar styrofoam bird – quickly adopted by some children present – which contained an authentic beak and feathers, possibly to serve as a substitute for one of my great-aunt’s birds, which had recently passed away. This bird itself (and in a way also the ladybird made out of a nutshell) carried baggage related to the issues of preservation and memory.

Mirjam Brusius is a cultural historian with an interest in modern transnational and imperial history in Europe, the Ottoman Empire and Persia. She holds degrees in History of Art, Cultural Studies and Musicology (MA Humboldt-Universität zu Berlin 2007) and History and Philosophy of Science (PhD University of Cambridge 2011) and currently works as a research fellow at the German Historical Institute London. She held research posts at Oxford University, Harvard University, the Max Planck Institute for the History of Science and the Kunsthistorisches Institut in Florenz – Max Planck Institute.