Taking the visit and Lecture of Wayne Modest, Head of the Curatorial Department at Tropenmuseum, Amsterdam as an occasion to observe the latest developments in the Berlin Museum Landscape, CARMAH invited him to visit the exhibition „Deutscher Kolonialismus“ [German Colonialism] at Deutsches Historisches Museum (DHM) and to join the exhibition’s curator Heike Hartmann to discuss the heritage of the colonial and the (re-)presentation of its objects. I and a small group of CARMAH staff and affiliates, as well as students from the Institute for European Ethnology were to join the exhibition walk.

„Deutscher Kolonialismus“ is remarkable for being the first stand-alone overview exhibition in a German State Museum on the (active) role of the German Empire in the colonial project, after years of debate and demands by activist groups and initiatives for a more thorough engagement with the time of colonial expansion and its legacy.

After an individual visit of the exhibition the group came together to engage with Hartmann on a broad range of questions, especially regarding her own position as a white curator in relation to colonialism but also colonial continuities in the museum landscape.

All of this touches on the question of the ‚post‘ in postcolonial, but what kind of notion can we have of Europe in a postcolonial context? Modest proposed here to consider the role of the Scandinavian states which were not, according to Modest, officially involved in the colonial project. Are they not part of the postcolonial Europe? In any way this postcolonial Europe can be said to be governed by a sort of anxiety politics, in which the anxiety the white hegemonial class feels over a loss of homogeneity, of everybody looking alike is projected onto those who – in their eyes – lack this likeness.

Modest then examined the role an ethnographic museum or museums in general can play and if and how museums can structure other kinds of politics – politics which are able to confront the perception of the colonial past culminating in the proverbial: „but it wasn’t all that bad!“. The ethnographic museum with all its potential has some serious inherent limitations, foremost the initial separation of those who belong (oftentimes looking at the exhibitions) and those who don’t belong (those whose artefacts are exhibited and who all too often don’t become visitors). „Migrants“ belong to the Volkerkunde museum, „Europeans“ to the national museum. Until we release ethnographic museum as a place solely speaking of the other, the migrant, the other, will always stay trapped.

Alternatively, museums can and should support and strengthen notions of citizenship not linked to race, ethnicity or blood. Referring to his own work in Amsterdam, Modest provided the example of how to exhibit Slavery and the Colonial Age, a period which is rooted in Dutch history as the ‚Golden Age‘. According to Modest, both can only come together in a specific moment, one as a trace within the other. If we speak of the Golden Age, the harrowing shadow of slave trade looms in the back ground. But if the latter is evoked, people will always conjure up images of those times when the ‘Dutch’ ruled the Globe. Another example is the removal of racist terminology from the exhibition texts at the Rijksmuseum Amsterdam – is this a progressive act of banning words forever poisoned with inhumane connotations, or is it a mere act of denying historical facts?

From this he moved on to thinking about multiculturalism and (mainstream) politics of diversity. Stemming from his own experience Modest concluded that ‚diversity‘ is an empty word if it does not imply (and it seldom does) an intervention into the structure in an attempt to decolonize the whole institution. On the contrary, perhaps the tasteful multiculturalism is just as bad (or good) at making real histories of oppression invisible. Maybe a possible way out of this can be to start an exhibition from the decolonial moment, use the museum as a tool to address the inequalities of the present. A practical example is the intervention of an Amsterdam decolonial activists group in the galleries of the Tropenmuseum. It consisted in placing yellow text boards next to the exhibitions official text boards, without any kind of limitation or censorship from the directory board of the Tropenmuseum. In this way two alternative ways of referring to material culture, two alternative histories were laid out for visitors to engage with – both closely interconnected but still opening a gap in which new understandings can be formed.

Modest then closed his lecture on a hopeful, albeit explicitly not optimistic note; with the hope that we can manage to inhabit the ruins of history (and of museums riddled with their colonial past) and make something new of them.

The ensuing discussion for which Wayne Modest was again joined by Heike Hartmann on the panel circled around the questions the lecturer had introduced so emphatically. What is our role as academics or as visitors, as whites, blacks or people of color in this reforming of the museum? And how can the museum then go on to reach out beyond the limited scope of science and the arts? Both panelists highlighted the ambivalent nature of a museum, Modest talked of the Tropenmuseum as a place which often adopts a racist grammar in its worldviews on the one hand, and on the other a place that never tried to hide its colonial past, and that always took it as something that has happened and that needs to be engaged with in the present moment. As long as a museum remains a space only for the production of representation, such an engagement is impossible. Referring to her own exhibition at Deutsches Historisches Museum, Heike Hartmann points out the broad spectrum of comments and feedback from visitors. There is a lot of praise and constructive criticism, as well as people criticizing the necessity of such an exhibition and denial of the German implications in colonialism, coupled with racist world views and language. But even though not everybody might be in agreement, Hartmann argues that especially those who are in opposition to the idea of engaging with colonial history in such a critical way are addressed. This is because the irritation testifies to the confusion and to a clash of differing worldviews, and might be the beginning (at least for some) to question their own ideas and preconceptions. 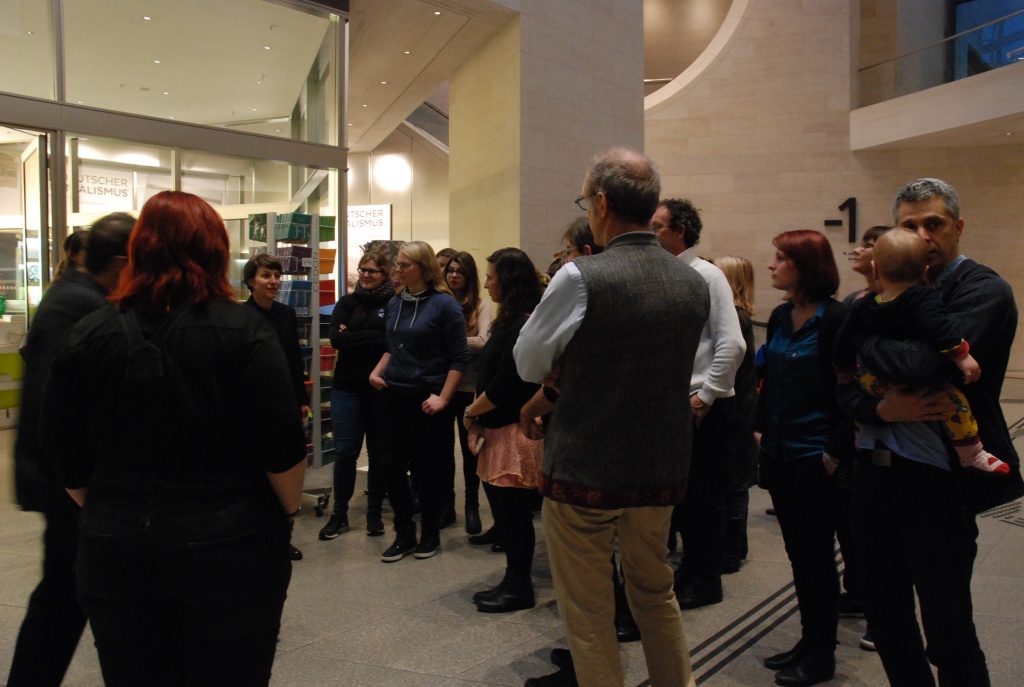 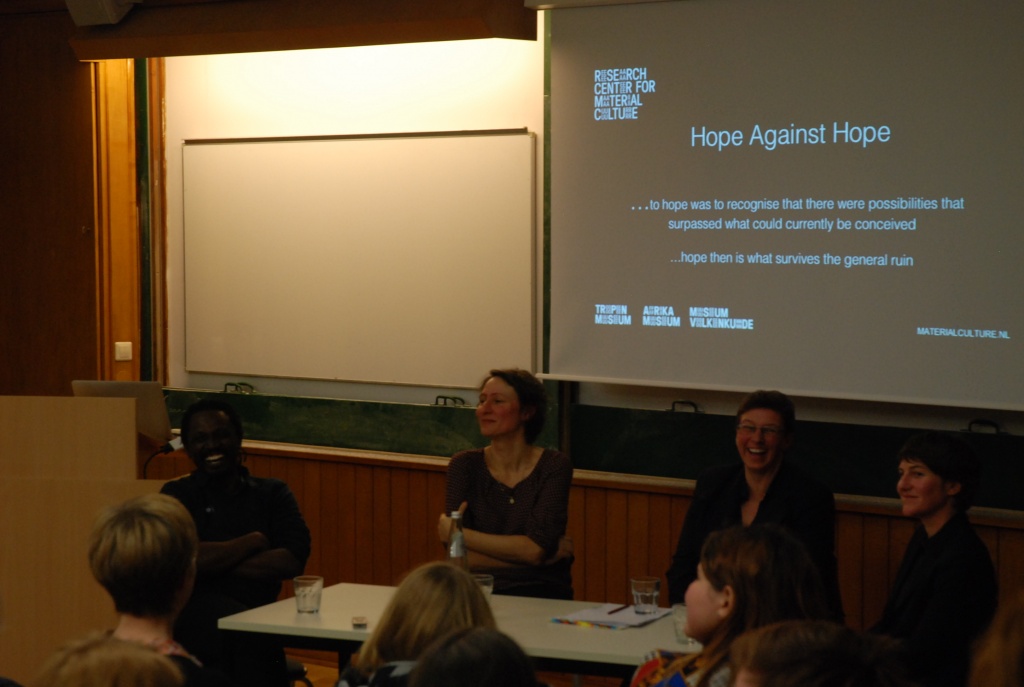 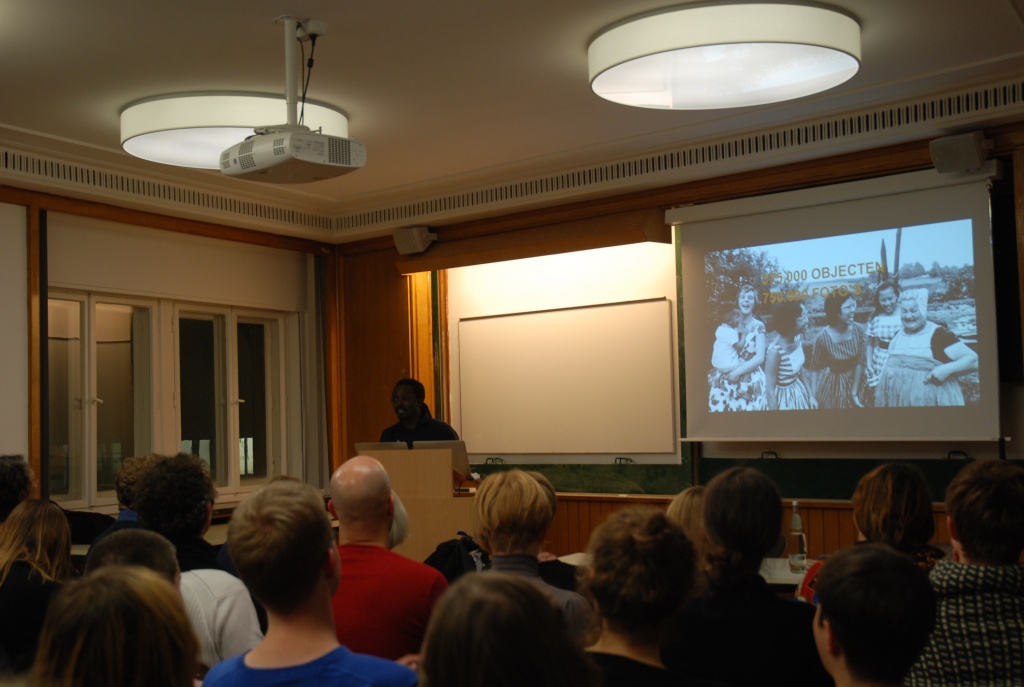 After having returned to CARMAH´s rooms at the Institute for European Ethnology the audience was more than well-prepared to listen to Wayne Modest talk on „(Ethnographic) Museums, Anxiety Politics and the Question of the Postcolonial“ and the ensuing podium discussion with Modest and Hartmann, introduced and moderated by Larissa Förster and Susan Kamel.

Contrary to the established proceeding of a talk structured around a central theme with linear path of argument, Modest straight away established that his lecture would be more focused on introducing a set of projects and ideas on the relationship between anthropology (and anthropological collections) and history. What emerged here was the central theme that Modest continued to touch on and which functioned as a form of implied question in all of the following problematizations. The question of how ethnographic museums as institutions with all their historical entanglements but also all its resources (human as well as material) function in the present moment. Talking from his own professional, but also personal point of view, Modest introduced his current employer, the Tropenmuseum at Amsterdam. Having been opened as the Koloniaal Museum in 1871 – its mission having been to ‚inform’ the public about life in the Dutch colonies – the museum reformed, and in 2014 was merged with the Volkerkunde Museum and the African Museum. It has, in recent years, hosted a number of exhibitions aiming not to shed but rather to light on its role in propagating a racist worldview and colonial exploitation and oppression. Taking this as his starting point, Modest invited us to think about the different implications such a museum has in the present day. What does one make of a museum that broaches the issues of colonial history situated in a mostly non-white neighbourhood of east Amsterdam? What to do with a collection of over 375 000 objects and more than one million photographs? And, what does it mean for Wayne Modest – an academic on the one hand but also a person with afro-Caribbean heritage – to be working in such an institution? Is he a traitor to his own ‘origins’ – as he is being accused of?

Christian Beeck is a Graduate Student at the Institute for European Ethnology. His research interests include transformations on the digital labor market as well as questions on emotions and religious experience.