The “Memorial to the Murdered Jews of Europe” in Berlin opened to the public in 2005. Designed by architect Peter Eisenman, it consists of 2711 slabs made of concrete, covering 19,000 square meters in total and offering a very particular set of experiences for its visitors. A statement by architect Peter Eisenman on the memorial’s website demonstrates that he had quite detailed ideas about what kind of experiences the field of slabs is supposed to mobilize for its visitors: 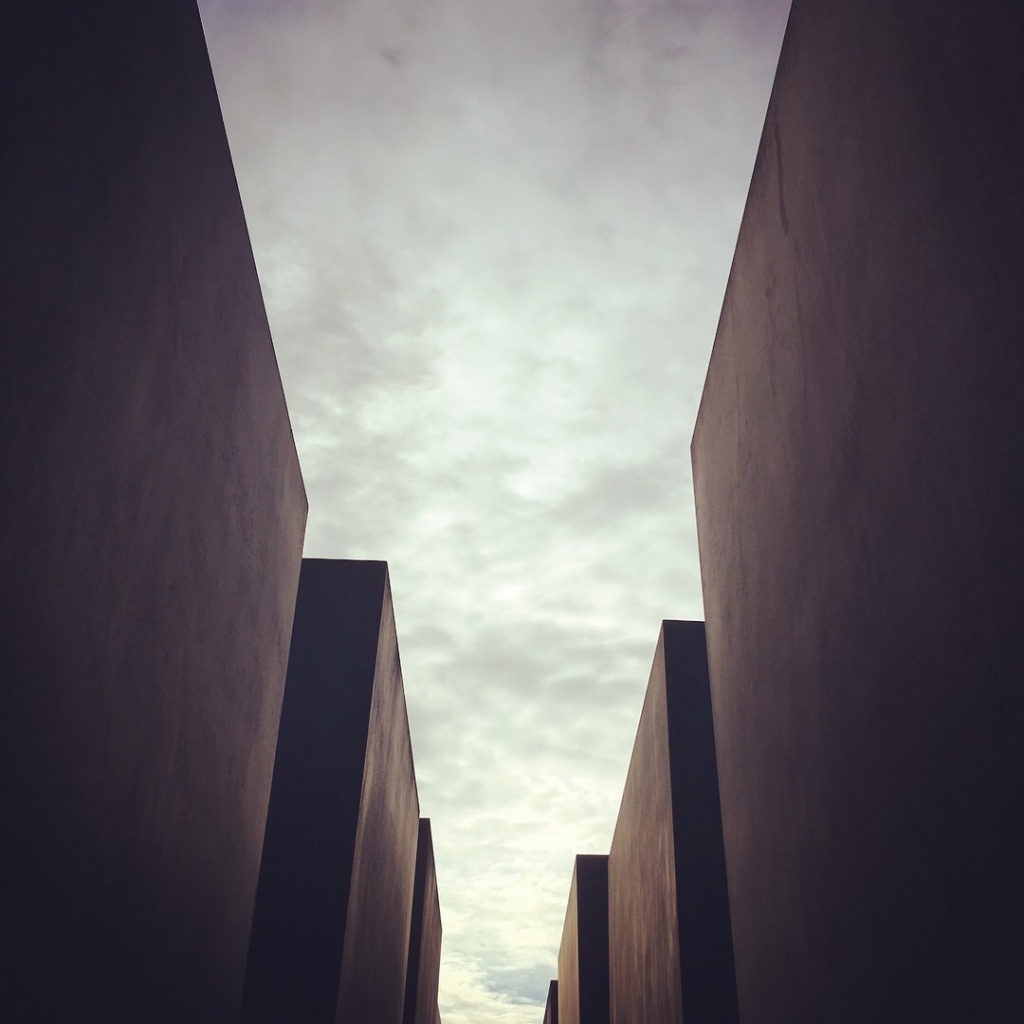 From an analytical viewpoint, what Eisenman describes here can be understood as the emotional affordances of this particular memorial. In cultural anthropology and related disciplines, the concept of affordances is often used to describe which kind of practices particular materialities and architectures afford to human actors relating to them. From this perspective, the Holocaust memorial affords particular practices for its visitors. If we bring this together with the perspective of the anthropology of emotions, we can add that the memorial affords particular emotional practices. Building upon the work of cultural anthropologist Monique Scheer, I understand emotions not as located solely inside of human subjects, but as inherently bound to bodily practices. Scheer phrases this through the expression, that we (as human actors) do not have emotions, but we do emotions. Of course, this does not mean that in our everyday life we enact single emotions, which can be neatly distinguished from another, but rather we enact complex emotional experiences. Such experiences include heterogeneous and sometimes contradictory mixtures of perceptions, sensual impressions, emotions, feelings, affects, but also cognitive and discursive reflections.

“The Ort [German for “place”, C.B.] is subdued in manner, effectively designed to minimize any disturbance to the Memorial’s field of pillars. Its mass, weight, and density seem to perceptibly bear down and close in on individuals. The organization of the space of the Ort extends the slabs of the field into the structure, provoking a continued state of reflection and contemplation once inside. […] This grid is rotated against the logic of the field, thereby thwarting any paradigmatic understanding of its formal arrangement. The uncertain frame of reference that results further isolates individuals in what is intended to be an unsettling, personal experience.” (Peter Eisenman, link)

As mentioned above, according to the memorial’s website, architect Peter Eisenman had quite detailed ideas about these entanglements. The architecture of the memorial is supposed to afford practices of wandering around lonely, of getting lost, of experiencing isolation and thoughtful contemplation––all this, of course, to emotionally remember the Holocaust. From an analytical viewpoint, what the memorial is supposed to afford is a particular way of past presencing the holocaust through emotional practices.

However, if you visit the memorial, what you can actually observe are not so much practices pointing towards emotional experiences of isolation and disturbance. Rather, what you can usually observe are visitors using smartphones or other cameras to take pictures and shoot videos, often already starting right after entering the field. This is to say: for many visitors, digital media practices are an integral part of visiting and experiencing the memorial.

This is where the approaches of media and digital anthropology come into play and can help us to better understand the ongoing transformations of heritage experiences due to the rise of digital media. In an ongoing research project, I am taking a closer look at the digital media practices at the Holocaust memorial, both through participant observation at the memorial itself and through an ethnographic analysis of media practices online. 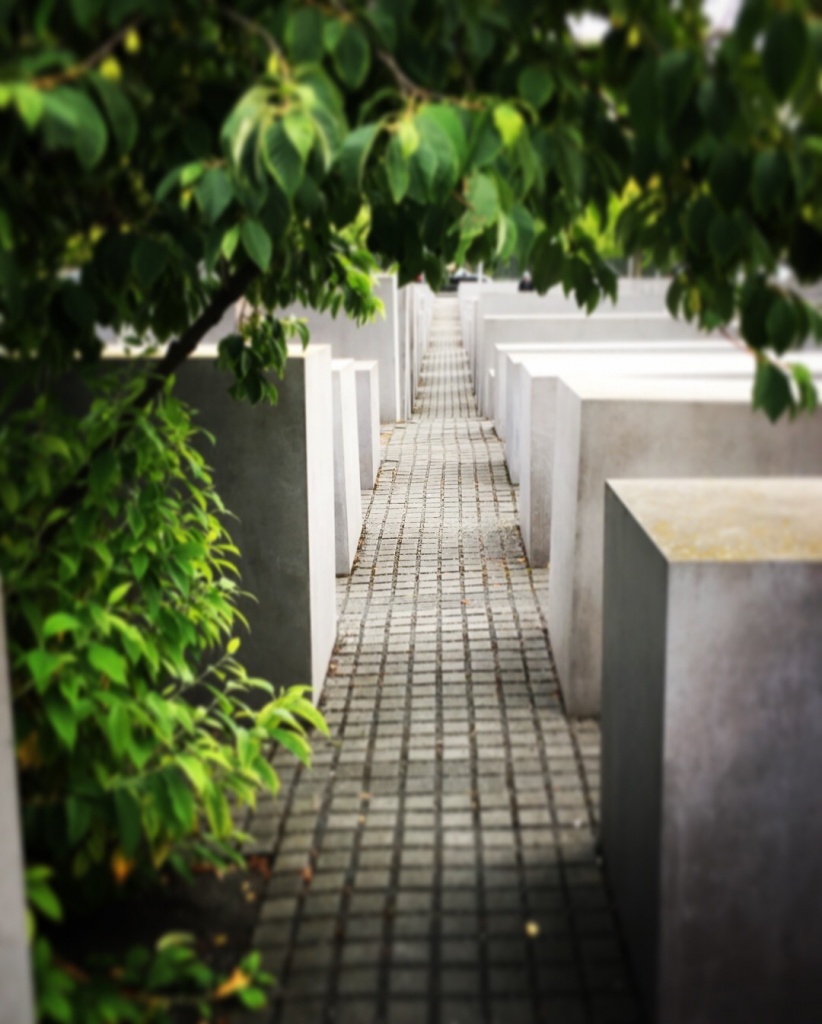 The research is still ongoing and the results are only preliminary. Thus, the intention of this blog is not to report exhaustively on the empirical results, but rather raise critical questions concerning the ongoing debate about the appropriateness of media practices at heritage sites, such as: How do these media practices relate to the emotional affordances of the memorial? Do they ignore them? Do they accept them? In which particular way do they enact them?

In this blog, I can answer these questions not for the whole variety of media practices at the memorial, but at least for one particular media practice very common at this and other heritage sites: making selfies. The selfie as a particular aesthetic form is often associated with vanity, self-centeredness and narcissism. And when we conceptualize making selfies as an emotional media practice, we might agree that often they are exactly that: a practice of enacting emotional experiences that circulate around one’s own bodily presence and beauty – experiences that are continued, of course, through practices of uploading selfies on social media to receive appropriate emotional confirmation.

During my participant observation, I sometimes observed rather excessive cases of making selfies: a young woman, for example, brought her own selfie tripod and, without actually going more than a few steps into the field, stayed at the outer part where you can take pictures in the sun. Here, she spent a whole 15 minutes trying out various angles (with sunglasses, without sunglasses, with hat, without hat, etc.) to capture the best selfie.

If you visit Facebook, Instagram or other platforms to search for pictures made at the “Memorial to the Murdered Jews of Europe”, you will find thousands of them publicly posted, many of them selfies. Among these selfies you will find those having a strong emphasis on “happiness” and “fun”, usually expressed through bright smiles of the person or persons being portrayed. Sometimes, as in the example found here, the bright smile of the visitor is accompanied by additional comments such as “Omg [meaning: Oh my god, C.B.]. Love this ???” or “Looking too cute!!!”. Such comments emphasize that the picture is about the person’s beauty and good looks. On Instagram, you will find similar pictures often complemented by hashtags, such as in the case of the example found here: “#berlin #shortholiday #amazingweather #muchIove #sunny #memoriaItothemurderedjews #loveyou every brownie needs a blondie ♡?”. 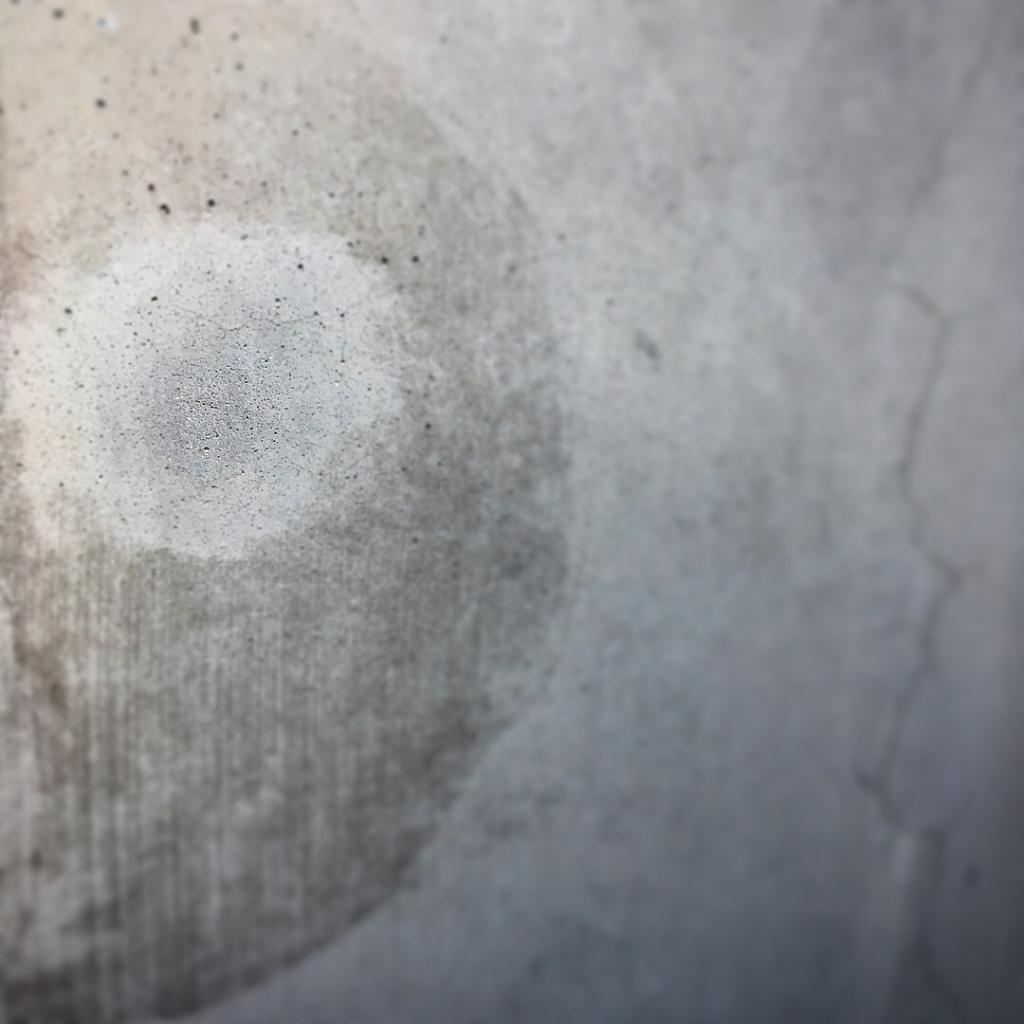 Such practices have led the Jewish-German artist and comedian Shahak Shapira to create what he named the “Yolocaust”-project in January 2017. The artist created a website on which he uploaded selfies and selfie-like pictures taken at the memorial, and he added actual footage from concentration camps as a “new background” for them. The original pictures were taken down from the website, which by then had over 2.5 million views (according to the artist). A video that documented the project then went viral, received almost 80 million views on Facebook and contributed to a controversial debate about (what the video calls) “selfie culture” at memorial sites related to the Holocaust. You can access the video here––but please be aware that it includes very graphic portrayals of violence and that there are critical ethical questions concerning the project left unanswered by the video.

The debate fostered by this video circulates around the question, what “appropriate” behavior at the holocaust memorial is in terms of media use. As a cultural anthropologist, I am not interested in whether the selfies should actually be considered appropriate or not. Rather, I am interested in how the controversial negotiation of appropriateness reflects a conflict we witness on a broader scale. In this conflict, enacting emotional experiences that relate to the “original” emotional affordances of the memorial is considered appropriate, while such emotional experiences that apparently deviate from this norm are considered inappropriate or simply wrong.

A critical ethnographic contribution to this debate can point out that the right vs. wrong dichotomy applied in such debates fails to account for the complexity of digital media practices. The fact that many visitors are using heritage sites as a background for selfies does not mean, that none of them relate meaningfully to the past. On the contrary, the “happy-selfies” are merely one particular pole within a broad spectrum of emotional experiences enacted through selfies. Let me give you a few examples of others: 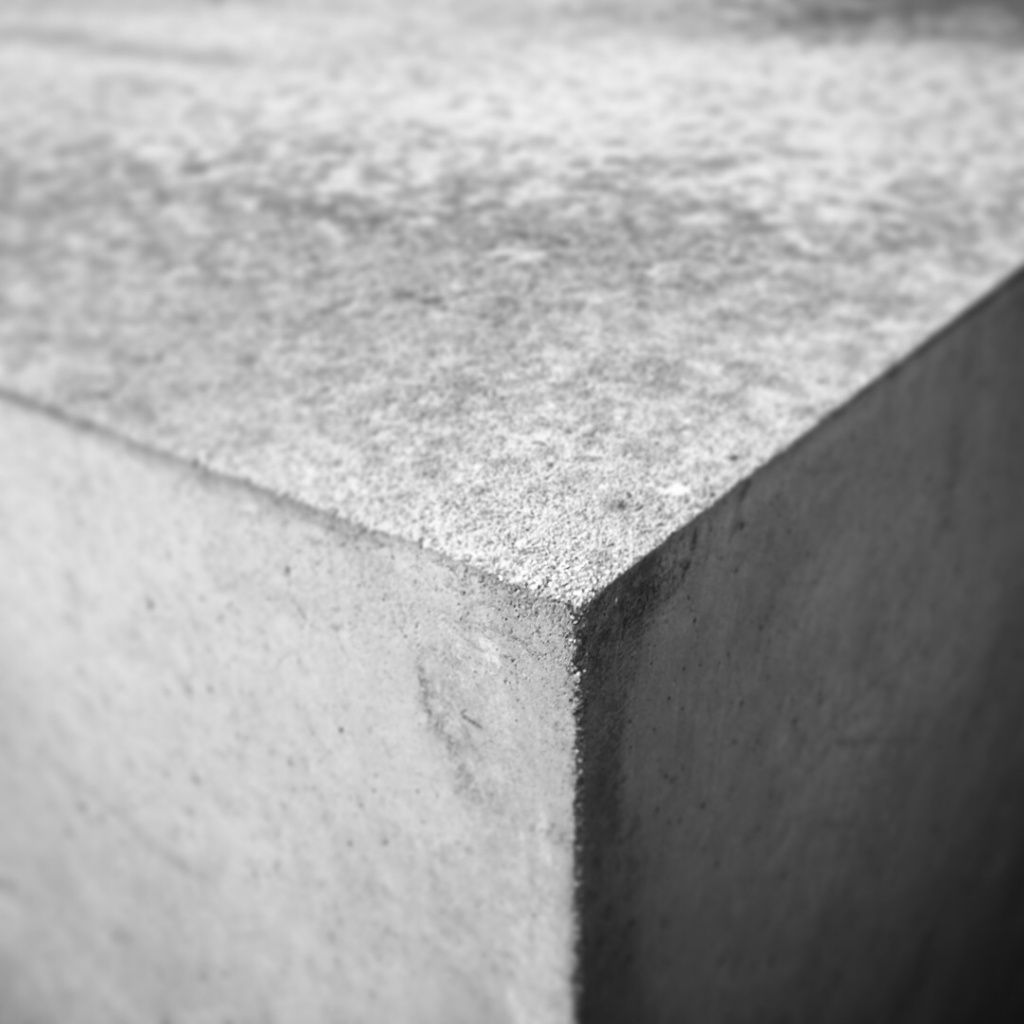 People might smile on a selfie posted on Facebook, like the young man in the example found here, but they add comments such as “My heart goes out to all the lives that were affected by the holocaust, it’s beautiful to see that the world has acknowledged the lives lost with this memorial.” Or they might take a selfie appearing as narcissistic, such as the young woman in the example found here, yet they express sadness and contemplation by emphasizing that we should “never forget”. Or they might even show a “thumbs up” gesture into the camera, like in the example found here, yet what they mean is to express their approval of the memorial as a place of memory. Or, last but not least, they might write nothing at all, simply looking into the camera, expressing sadness or even anger, such as the young man in the example found here. In the comments below he is asked by a friend: “Why do you look so angry?” And he replies: “Because we do not learn from the past ?” [my translations]. In doing so, he is relating his bodily presence at the memorial meaningfully to the past and connecting it to present transformations of the political landscape in Germany.

What we witness here is not simply contemplation and remembrance as it is envisioned on the memorial’s website, nor are these practices merely focusing on self-representation. Rather, we see complex entanglements of emotional media practices that include both dimensions. The crucial difference between these practices of selfie making and the “happy-selfies” mentioned above is not the aesthetic form of the selfie, but particular emotional experiences enacted through them. Sometimes, a selfie might be a means to express joy and happiness, but it can also articulate sadness, respect and compassion. Through making selfies, these emotional experiences are not only portrayed, but they are put in relation to the material setting of the memorial. Thus, through emotional practices of making selfies, bodies and their emotions can get closely entangled with the material settings. If this is the case, a selfie in the context of the Holocaust memorial also becomes a practice of past presencing, since through enacting the entanglements of bodies, emotions and material settings, it relates meaningfully to the past. To put this in a nutshell: Depending on how bodies and material settings get entangled in emotional media practices of selfie making, these practices are not ignoring the memorial’s affordance to remember the past, but are instead presencing this past in a meaningful way.

Furthermore, making selfies is just one and certainly not the central media practice at the memorial site. For example, visitors regularly take pictures of each other portraying them as they are looking into the far of the field in lonely contemplation, as they wander around in silence or as they are touching the memorial with a meaningful gesture. Other Instagram and Facebook users focus on aesthetic photographic representations of the symmetry of the memorial’s slabs, or on the play of light and shadow in the memorial, sometimes including objects (most regularly: roses) in their pictures, while complementing their posts with meaningful texts pointing out the need to remember the Holocaust. All these media practices deserve careful ethnographic attention, especially regarding their emotional implications. Contrary to the discourses highlighting a superficial “selfie culture” at memorial sites, it might turn out that visitors often use digital media to relate to the memorial in different but nonetheless meaningful ways. Or, in other words, they find different ways of past presencing through new media. 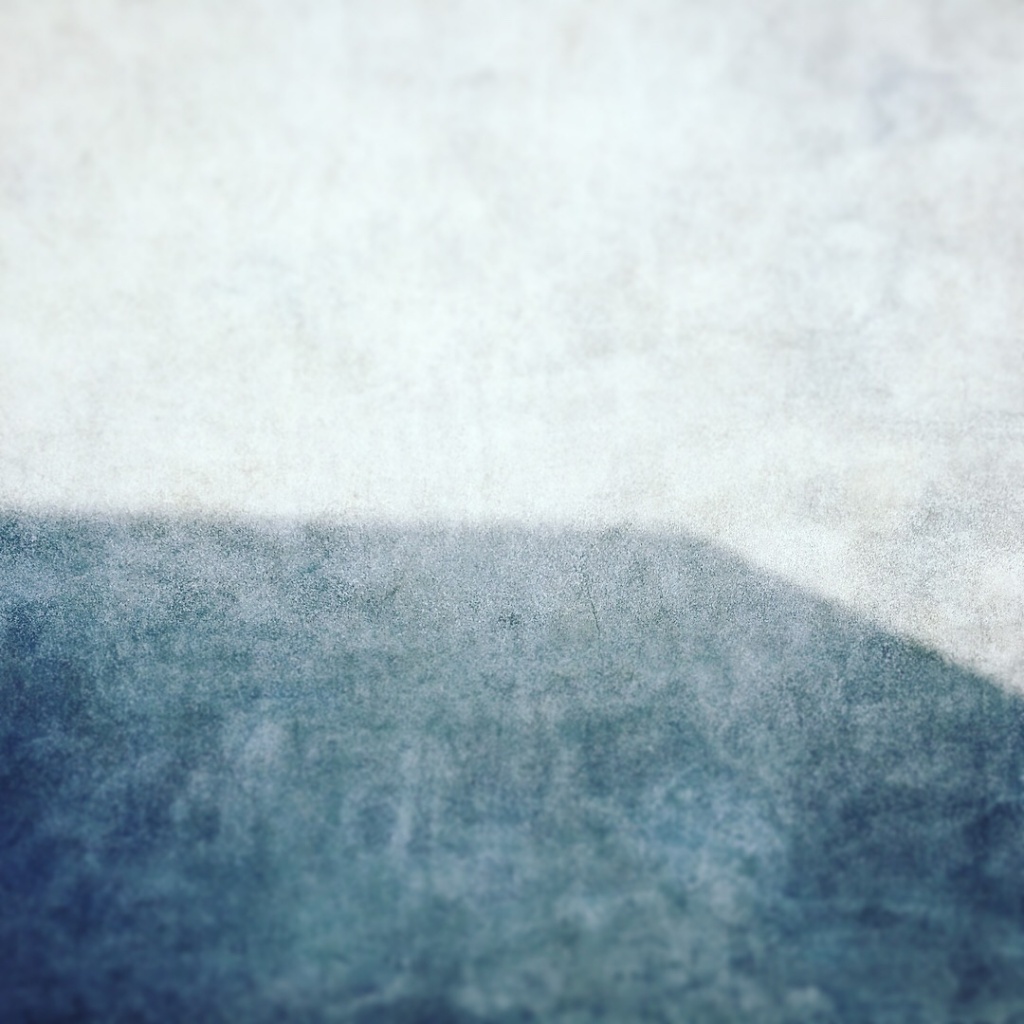 This blog post has also been published on: https://doingselfieblog.wordpress.com/2018/01/19/past-presencing-through-new-media-making-selfies-in-heritage-spaces/

Christoph Bareither is Junior Professor of European Ethnology & Media Anthropology at the Department of European Ethnology at the Humboldt-Universität zu Berlin and the Centre for Anthropological Research on Museums and Heritage (CARMAH). His research is concerned with the transformations of everyday practices and experiences enabled through digital technologies. Christoph is especially interested in the fields of media and digital anthropology, popular culture research and the ethnography of emotions. Currently he is starting a new research project, in which he will use approaches of media and digital anthropology to foster our understanding of media practices and experiences at memory places and heritage sites in Berlin and Europe.